In 2017 we conducted the first assessment of this kind, and have repeated it in 2019 to see what progress has been made. Read the full report here.

Our key findings based on the 2019 policies are:

The questions we asked:

1. Aldi recommends that preventative antibiotic use be avoided for own-label fresh milk, fresh primary pork and chicken production and that strategies be put in place to achieve this, but routine preventative use of antibiotics is not prohibited.
2. Aldi only limits use of HP CIAs for own-label fresh milk, fresh primary pork and chicken production.
3. Aldi only monitors antibiotic use for own-label fresh milk and primary pork and chicken production.
4. Asda antibiotic-use data does distinguish between free range and non-free range eggs, and all-year-round housed beef cattle and mixed grazing and housed cattle.
5. Co-op has only published antibiotic-use data for 2017
6. Iceland has told us they are currently developing an antibiotics policy but do not currently have an active policy.
7. Lidl has only published data for poultry for 2017. Lidl's 2017 data seems to be just a re-publication of national averages rather than data for its own suppliers.
8. Lidl has published data on antibiotics-use in free range poultry, but only for two months which  makes it insufficiently meaningful.
9. M&S has only published antibiotic-use data for 2016 and 2017.
10. Morrisons has only banned routine preventative antibiotic use in poultry, including egg layers, but will extend this prohibition to all species in 2020.
11. Morrisons will ban colistin in 2020. Already banned in pork.
12. Tesco has not banned colistin, but has reported zero use in 2018.

In 2017 we undertook an assessment of the antibiotics policies of nine of the UK’s largest supermarkets. We investigated which businesses had taken concrete action to reduce the amount of antibiotics being used in their supply chains.

We assessed the publicly available policies of the supermarkets, as policies regarding food for public consumption should be published in the public interest. You can find the policies of each of the supermarkets here: Aldi, Asda, Co-op, Lidl*, M&S, Morrisons, Sainsbury's, Tesco, Waitrose.
*since publishing our 2017 report, Lidl have published an antibiotics policy. It wasn't included in our 2017 report as our report was published prior to this.

[i]Aldi: public position on antibiotic use is available, put not the policy
[ii] Aldi: not banned, however “prophylaxis only permitted under the direct instruction of a veterinary surgeon.  Producers must retain a record as to why prophylaxis was necessary, and have a management strategy on how to prevent future prophylaxis.”
[iii] Co-op: Not mentioned in the policy, but reference to “working to avoid the use of antibiotics that are important to human medicine” can be seen in a document published on the Co-op website.
[iv] Morrisons: routine use banned in chicken, egg & milk production, but not beef, pork and lamb. By 2020 all Morrisons branded fresh pork will be from pigs where routine use has been eliminated.
[v] Morrisons: Restricting the use of CIAs applies to milk, chicken and egg production, and from 2018 will include pork. Beef and lamb not covered.

For more information on the results of our 2017 assessment download the report here.

What you can do

Back to Our Campaign 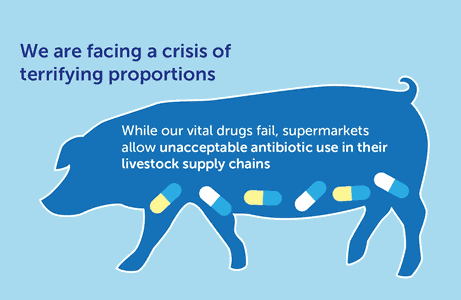 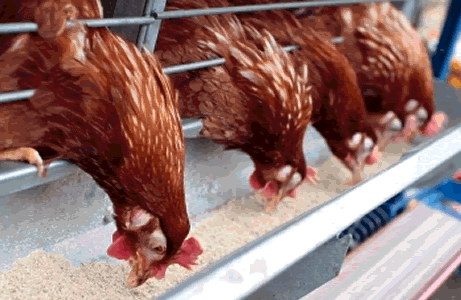