Meat, dairy and eggs produced with the misuse of antibiotics could still be making its way on to UK supermarket shelves, due to inadequate policies, according to a new report launched today by the Alliance to Save Our Antibiotics [1].

This is a particular concern because the government is in trade talks with countries, like Australia, that use certain antibiotics for growth promotion, a practice that is banned in the UK. The ban on growth promoters does not apply to imported food, a loophole which neither the government nor most of the supermarkets are addressing.

The Alliance has assessed the publicly available antibiotic policies of the UK’s ten leading supermarkets and found that they all now have a policy aimed at ending routine preventative antibiotic use in their supply chains [2]. Two years ago, only six supermarkets had such a rule. Unfortunately, most supermarkets only apply their antibiotic policies to some or all of their own-brand products. Some policies only cover own-brand fresh meat, dairy and eggs of UK origin, leaving frozen produce, ready meals, ingredients and branded produce with no restrictions on antibiotic use, other than minimum legal standards.

Suzi Shingler, of the Alliance, said: “Supermarkets have a responsibility to ensure that all meat, dairy and eggs they sell is produced without misusing antibiotics and comes from farms with good husbandry. The current mishmash of rules means that consumers cannot tell whether this is the case or not. Some imported food may even be produced by using antibiotics to make animals grow faster, a practice which has been banned in the UK for 15 years. As the UK is seeking to reach new trade deals with non-EU countries, it is more important than ever to have the same standards for imported and British produce. That’s why, today, the Alliance has launched a petition urging supermarkets to apply their rules for responsible antibiotic use to all animal products sold in their stores [3].”

The petition is being supported by TV’s Dr Chris Van Tulleken, an infectious diseases doctor and MRC Clinical Research Fellow at University College London Hospital. He says: “We need to get antibiotic misuse out of the food chain as it is contributing to the global crisis of antibiotic resistance. If we no longer have reliable, effective antibiotics, we will see a lot more deaths due to infection. This will even affect young people, including children.”

Resistance to antibiotics caused by the overuse of these medicines in livestock and humans is increasing, and threatens to undermine medical procedures such as hip replacements, cancer chemotherapy, organ transplants and the treatment of preterm babies. It is predicted that if the world doesn’t radically change how antibiotics are used, by 2050 antimicrobial resistance will kill more people than cancer does today.

The key findings of the Alliance supermarket survey are: 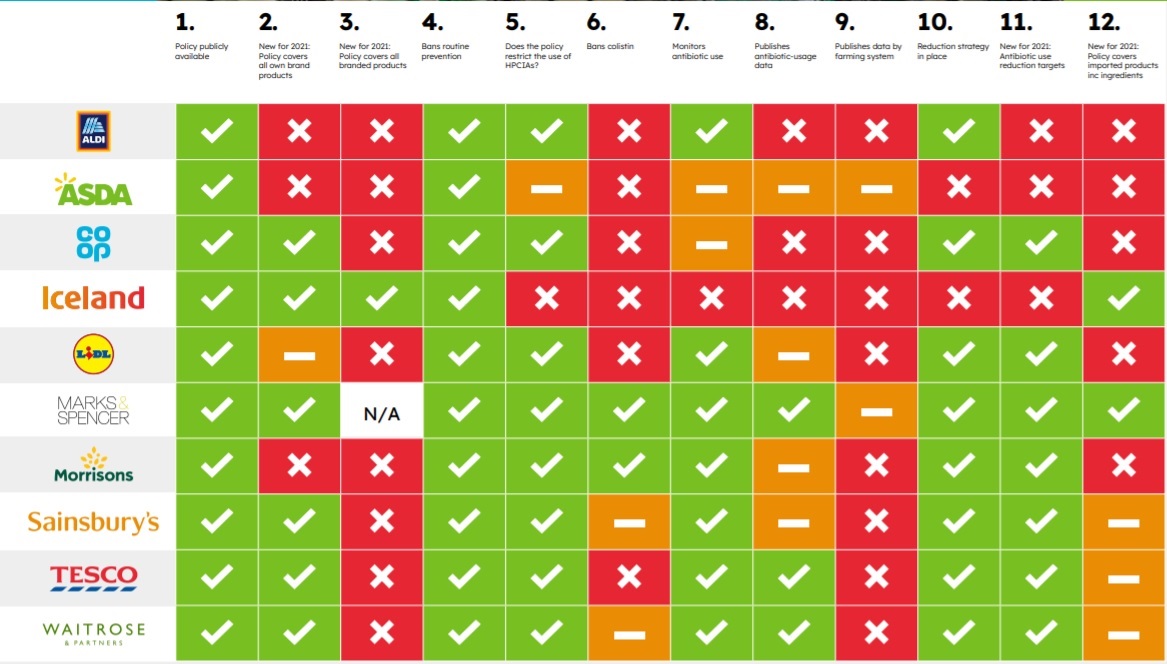 The following criteria were used for assessing the supermarkets:

3. The petition is being sent to Aldi, Asda, Co-op, Lidl, Morrisons, Sainsbury’s, Tesco and Waitrose. https://act.saveourantibiotics.org/page/92612/petition/1

*Correction issued on 23.11.21 - previous versions of the report and press release stated that Tesco's antibiotic policy didn't apply to their entire own-brand range. This was incorrect and the table has been amended.

The Alliance to Save our Antibiotics is an alliance of health, medical, civil-society and animal-welfare groups campaigning to stop the overuse of antibiotics in animal farming. It was founded by Compassion in World Farming, the Soil Association and Sustain in 2009. Our vision is a world in which human and animal health and well-being are protected by food and farming systems that do not rely on routine antibiotic use.